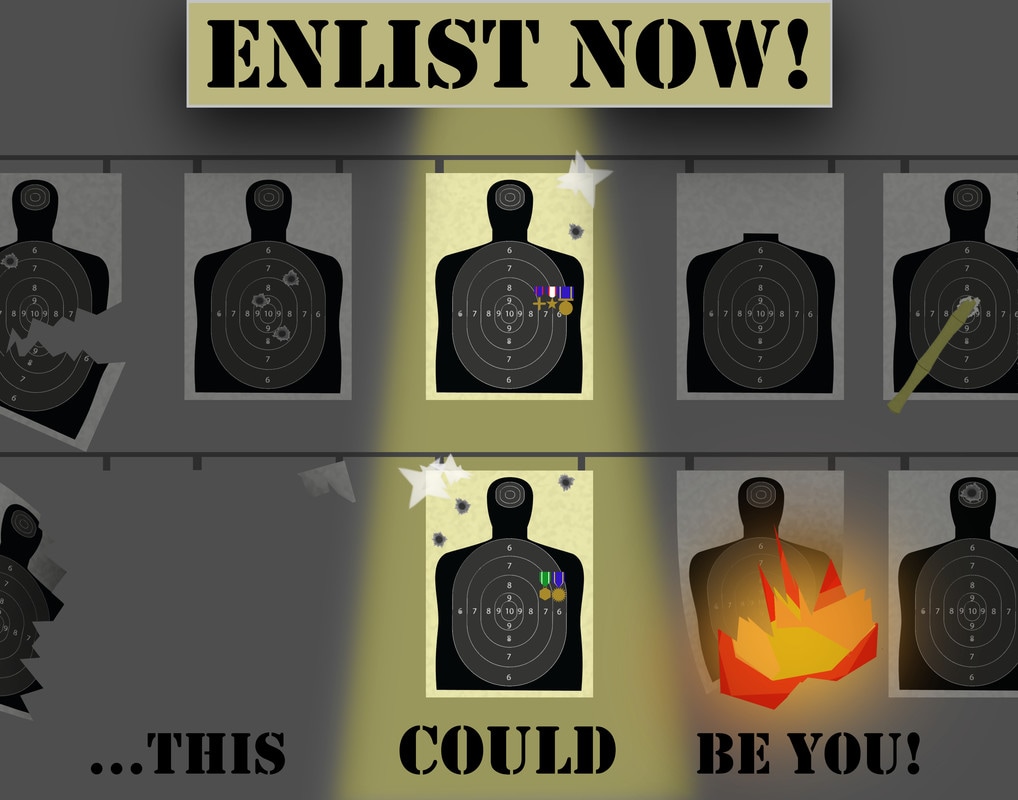 My art piece depicts an ensemble of targets at a shooting range. Two of the targets are in a spotlight, shining, and adorned with medals. The targets on the sides, however, are shown covered in bullet holes, ripped, burned, and otherwise damaged. Nearly all of the wounds on the targets would be fatal if sustained by a human. While somewhat shocking, this helps to convey a specific, and often overlooked, truth of war.

This truth that I’m trying to convey is that the romanticization of war, in the sense of one returning as a hero, is unjustified. While someone may enlist in order to gain pride, prestige, and honor among their peers at home and abroad, this is simply the hero’s story. These heros are put in the spotlight, while soldiers who are simply unlucky are often overlooked. The ratio of medalled, shining targets to damaged ones is meant to exemplify the real chances of coming back a hero, or at all.

I created this art piece using photoshop, and it is mostly from scratch. The only thing taken from the internet is the target imagery itself. When making this art piece, I paid attention to balance, and how spacing, brightness and darkness, and visual effects drew one’s eye about the art. The addition of fire at the bottom, and the contrasting lack of a full target to its left is an example of this. Drawing one’s eye about the piece is very important in something like this, as there is much to look at, as well as a good number of small details to be found.

While creating this art piece, I refined my skills in Photoshop, as is always the case when working on a new project. As far as drafting, there really wasn’t any. Time has been incredibly tight on this project, and I wasn’t able to make multiple drafts for it. I had gone through two rounds of critique though, helping to balance out and visually enhance my image in any way possible. Because of the lack of drafting and time, this project hasn’t evolved from its original self. Rather than making multiple lower-quality copies, I decided to invest my time in a larger piece that could be more easily refined.

During this project, we explored both sides of war, considering both the political aspect of it, and the visceral, on the ground facet of war. As for the political side, we learned about the Cold War and the driving influences behind some of the actions committed during it. The main part we focused on was the Red Scare, and how it contributed to the building tensions that began the Vietnam War. One of our largest sources was the leaked papers regarding the Gulf of Tonkin incident, and what the basis was for the US to start the Vietnam War. This revealed what was likely a hidden motive for the US, that being the want to oust the newly forming communist north. Once we had established the basis for this war, we began exploring the experiences that followed, how the draft affected the nation, and what protests for the war were like.

This project I think mostly helped me with document analysis. There were many occasions in which we were supposed to analyze documents, and reach conclusions based on them. The documents, this time, seemed a bit more vague than in previous projects, so they definitely strengthened my skills in this subject. We had choices for different, more difficult papers to use for the Gulf of Tonkin freewrite, and having chosen the "Spicy" ones helped to challenge me. And I'll say again, as always, that this project improved my skills in Photoshop. I made something nearly from scratch, and it came out looking quite nice in the end.

I've definitely taken a more in-depth perspective regarding war after finishing this project. Rather than flatly thinking that 'it should be avoided', I now know how specifically it affects people, and how they come back from war, if at all. I also now better understand how countries get into wars, and how frivolously a country can start one. The Vietnam War is a great example of this, considering the fact that the US started the war on an alleged attack, a torpedo launched that the captain of the ship that was fired upon remarked that 'it was probably just the sonar-man hearing the ships rotor.'
Powered by